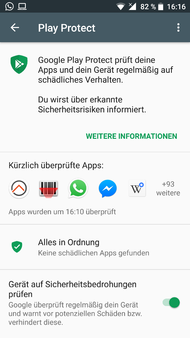 View in the device settings

Google Play Protect is a further developed version of the already existing protect and scan mechanism in the Google Play Store, which should protect Android users from the installation of malicious apps, like apps containing malware or which may compromise the device or saved data in any other way.

The basic functionality of the service is pretty simple: Google is permanently scanning and checking apps and app updates which are uploaded to the Google Play Store by third-party developers (according to Google, more than 50 billion apps are checked each day[5]). If an app contains malicious code or is behaving suspicious, the app will be removed from the Google Play Store. In addition to that, Google Play Protect also checks apps, which are installed from other sources as the Google Play Store, e.g. apps that are installed using sideload, as long as the setting, enabling this scan (Google -> Security -> Scan device for security threats), is enabled. If the installation of an app will be prohibited, or if Google Play Protect uninstalls a malicious app automatically, is not known.

The Security suite of Google Play Protect also contains the Find My Device service, which evolved from the android device manager.

In September 2017, Google introduced the SafetyNet Verify Apps API, with which app developers may query, if the Google Play Protect service is activated on the current device.[6]

Retrieved from "https://en.droidwiki.org/w/index.php?title=Google_Play_Protect&oldid=414"
Categories:
Cookies help us deliver our services. By using our services, you agree to our use of cookies.